Another African market EFS services is the offshore sector in Angola for several clients,
with typically air freight shipments every fortnight up to 3000kgs per movement & monthly
ocean containers from the Uk.

The local situation in Angola means that there are pitfalls to be aware of and one should
remember that the economy in Angola only really started beginning of the 21st century after
years of upheaval and war, the oil industry

The infrastructure is developing: for example the airport has no warehouse – specifically a cordoned
off area of the airfield exposed to the elements (such as the rainy season). Conversely, 4G technology
is also available to the Luandan market, no doubt a reflection of their sudden access to technology.

The local customs requirements are very strict: for air freight only freight rates from airwaybills are
used to levy duty and CIF invoices are not accepted. All documents with the airwaybill (invoice and packing
lists must be original as well). For ocean shipments, ARC loading certificates need to be raised and paid
for in the country of origin by the representative office of the Angolan government’s shipping council.

Most insurance underwriters will only offer insurance cover up to arrival quayside or wheels down airport.

EFS consolidates cargo for clients and loads containers at the Farnborough warehouse, but can also live load
consignments directly at suppliers premises. 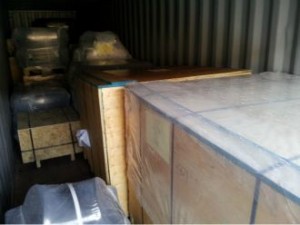 container being loaded for Angola