The Tyrrell chassis No. 008 took driver Patrick Depaillier to victory in the 1978 Monaco Grand Prix after finishing in second place in the season opening Kyalami Grand Prix. The car went on to give Depaillier another second place in the Australia Grand Prix that year. The car is a far cry from today’s incredible technical achievements seen racing the circuits of the World but just think it was cutting edge at the time!

After safely collecting the car and a quantity of spare parts, EFS ensured it was carefully delivered to the airport and palletised for its flight to the USA. Everything was carried out smoothly with the car arriving exactly as planned.

Did you know EFS ship – cars, caravans, trucks, trailers, motorbikes, and racing cars – all over the World! 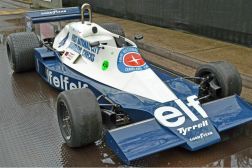 FAC
AIR
SEA
ROAD
EXPRESS
LOGISTICS
Testimonials
I enjoy working with Executive Freight very much and would recommend them to other exporters and importers.