Rechargeable Lithium Ion batteries are found in electronic devices such as smart phones & laptops, but did you know they may be considered hazardous for air cargo transport subject to the quantity, whether they are contained in equipment and how they are packed.
Alternatively, even if not deemed hazardous an airline will need to know if they are contained in any shipment. By September 2010 the US Federal Aviation Administration (FAA) said 46 incidents of aircraft fires had been linked to cargo including lithium-ion batteries. In August 2011 we covered this topic in our first news feature about lithium batteries  https://www.executivefreightservices.co.uk/2011/do-you-ship-lithium-batteries/ 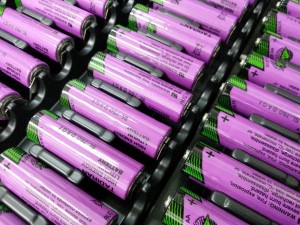 As a result regulations since 2011 have become more restrictive, none more so than since January 2015 Lithium Metal Batteries shipped on their own (bulk) are now banned on any passenger aircraft and can only travel on freighter aircraft within specific quantity limits.

As background, research has found that Non rechargeable lithium metal batteries fitted into devices such as calculators can ignite faster than lithium ion batteries reaching temperatures around 1,093 degrees C.

Many manufacturers are responsible with their processes in manufacturing, packing and distribution. That said pilots still voice concerns on the carriage of lithium batteries in large quantities in freighter aircraft. Other suggestions have been made to further limit total numbers of lithium-ion batteries that can be carried on a single flight. CAA agenda items prior to an ICAO meet also made suggestions to further restrict the number of lithium battery items in a particular packing blister & quantities per packet. Manufacturers argue this further increase’s their costs to market whilst not addressing the bigger problem of counterfeits.

Manufacture & distribution of counterfeit lithium batteries is another big area of concern posing a big safety risk because they are not manufactured to a high standard. Counterfeiters have targeted this industry because of the financial rewards: the industry is forecast to grow significantly – statistics estimated the industry was worth $17.5 billion in 2013 and is expected to grow to $76.4 billion in 2020.

Another issue facing the air transport industry is miss-declared and undeclared goods which includes batteries. Top x-ray equipment manufacturers are working on software to identify lithium batteries during the cargo screening process. If successful, it should prove to be a valuable tool in detecting undeclared batteries, which are more likely to be counterfeit items : legitimate and established manufacturers should be only too aware of the most current shipping regulations.

For further shipping advice on moving batteries by air (or indeed any other hazard) please call one of our IATA regulated and haz trained staff for advice.